I had acquired a SE 6AQ5 amp from an electronics warehouse some years ago, tearing out the existing circuit and rebuilding the amp with a parallel 5751 RC coupled driver stage.

All the heaters for rectifier, driver and output stages were run off a single 6VAC secondary winding. Not the best arrangement  for utilizing the amp on a high efficiency Altec horn system.

I wanted to experiment with a SMPS (switch mode power supply) to create a DC heater supply for the driver and output tubes.  I used a 19V 65W HIPRO computer power brick from an old ACER laptop that I no longer have in service. The DC output switches at a frequency of 60KHz.

Note: I have read that some SMPS will have a difficult time starting/warming up  cold tube heaters or filaments due to their low resistance when cold. I didn't experience that problem  and the output voltage seems relatively stable.  My advice is to spec the power brick for 3-5 times the rated heater wattage in your circuit and add a bit of resistance to the filaments.

I measured 0mVAC ripple at the output of the amp under an 8 ohm resistor load. Subjectively, the amp is now dead silent at idle and sounds fine during playback of random music tracks.

The drawbacks would be the bulk of the computer power brick , the LC filter parts and the heat generated by the dropping resistor.

SMPS Part 2 : What the Scope reveals

I had been experimenting with various filters for the output of my HIPRO computer power brick over the last few days.  Since I had only done some DMM measurements of the output AC ripple voltage and non-critical listening on speakers of marginal quality, I knew I had not done due diligence as an astute audiophile and technician.

I found that the AC ripple at the output of the filter above under no-load condition was about 150mVp-p.  The waveforms were hideous variations of square or triangle hybrids with all sort of ugly looking appendages poking out and oscillating in a random manner. After hooking up the SMPS with filter up to an active heater load, the first filter I posted here at the top of this page showed 80mVp-p AC ripple and  appeared to be oscillating wildly.

So I took that filter out and hooked up an LCR filter : 100uH ->1450pF -> 8 ohm -> heaters.  This first LC section was similar to what someone suggested I try on AA Tube DIY forum. There was some wild oscillation at the output of the filter, so I added a 56uF/25V OsCon solid aluminum electrolytic cap to the end for an LCRC filter. That did the trick and the output waveform, while still ugly looking was at least stable and not moving all over the place.  The AC ripple at the output of the filter was down to 30mVp-p, much improved.  Next, I looked at the output of my SE 6AQ5 amp with the RCA input jacks shorted and an 8 ohm non-inductive resistor connected as a load.  I measured 8mVp-p AC ripple at 120Hz , the waveform was a triangle shape and not rounded off like a sine wave.  With my DMM, I measured 2mVAC at the speaker posts. There was a very faint noise coming through the test speakers which was not audible during playback of random music tracks from my  laptop.  I have yet to look at the output of the SE 6AQ5 amp on my PC spectrum analyzer with ARTA to see if anything unusual is going on - for another day perhaps. 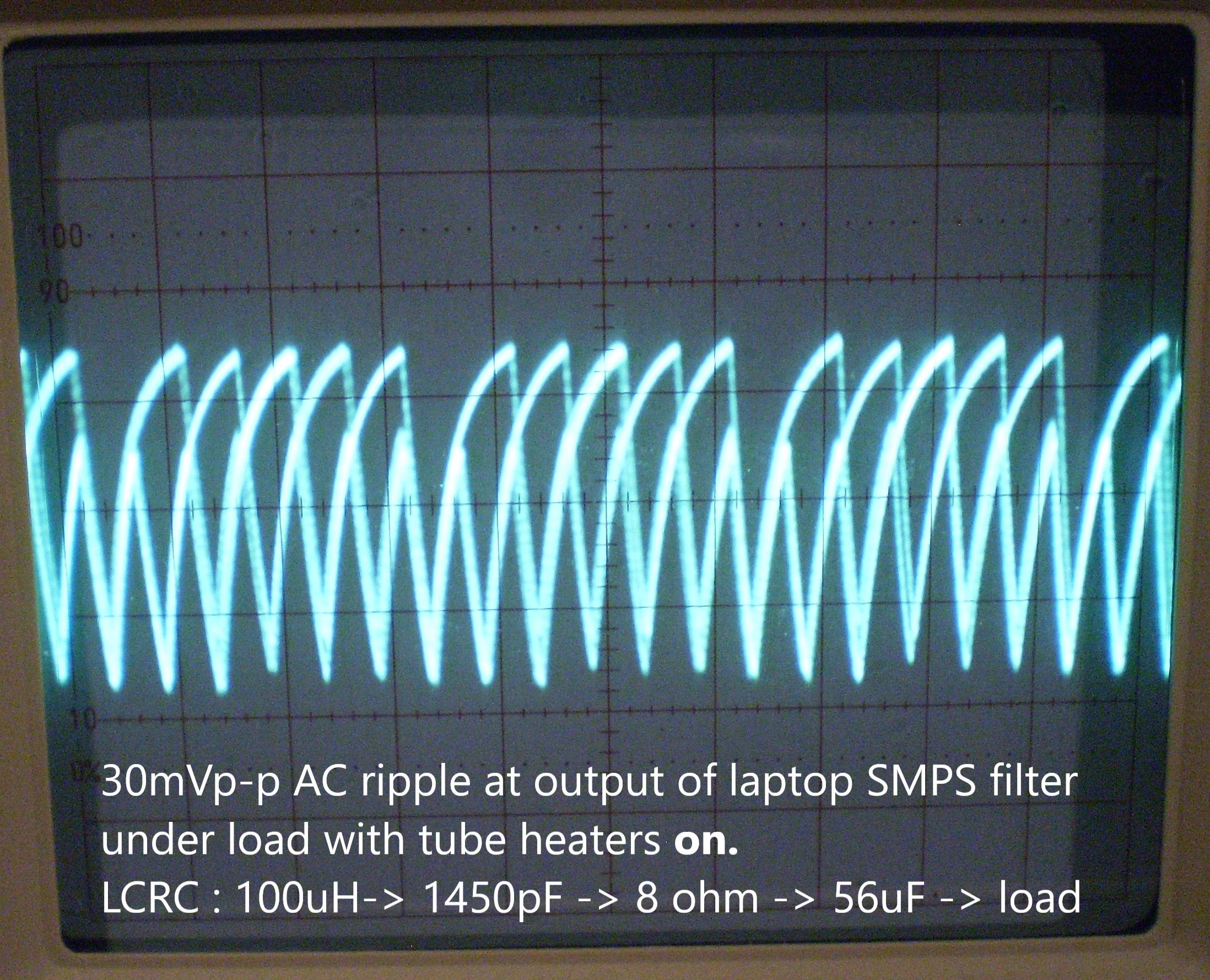 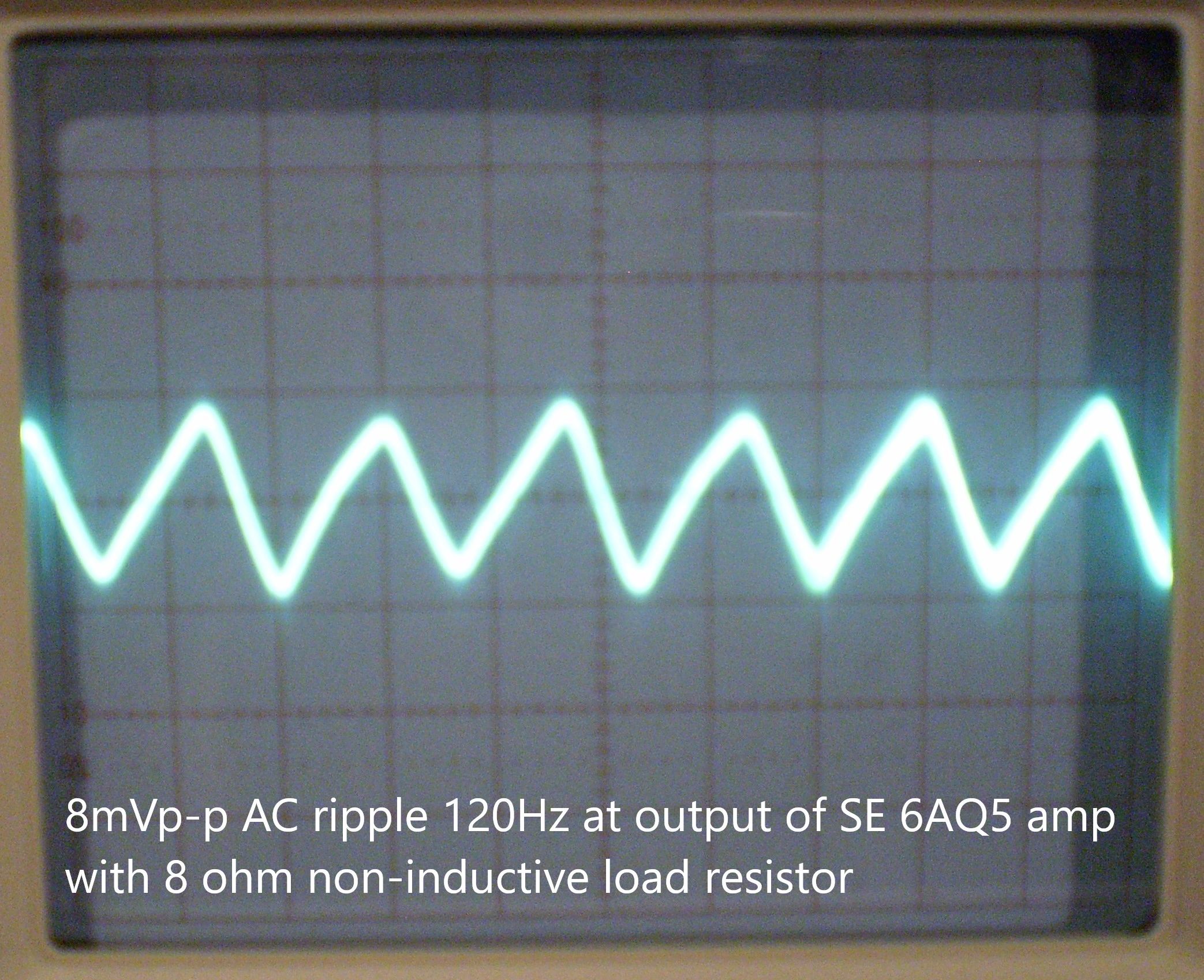 SE 6AQ5 amp was being created by the SMPS laptop power brick and filter or not.

After reconnecting the AC heater supply, I checked the output of the amp to find the triangle waveform still present on the output at idle.

A visual inspection of the SE 6AQ5 amp revealed a design flaw in the PS filter.  The output tube plate supply was connected to the first cap in the CRCRC power supply filter which is connected to the 6X4 rectifier cathode. That was putting a 10Vp-p triangle waveform on the plates of the finals and a percentage of that was getting to the output transformer secondary.

The extra filtering at the final stage plate supply  eliminated the triangle waveform I was seeing on the output transformer secondary.

The signal circuit was also rebiased for more headroom in the driver stage.

In this case, using a SMPS DC heater supply for a common low power SE amplifier does not seem to present any advantages over AC heaters even if the winding has no center tap to reference ground.